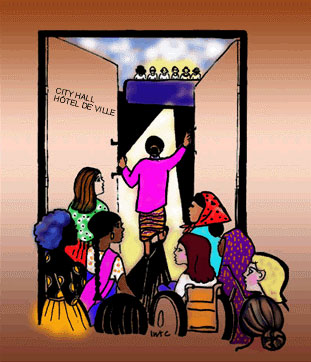 City Council is the decision-making body responsible for turning community needs into municipal services — from human services, such as social services and housing, to hard services, like roads and waste management.

City Council usually meets at 10 a.m. on the second and fourth Wednesdays of each month, except in March, July, August and December. Special Council meetings, Committees-of-the-whole, are called as needed, especially at budget time. All meetings are held at City Hall.

Council and standing committee meetings are advertised in the City page in Friday’s edition of Ottawa’s daily newspapers, as well as on the city website. For more information, contact a Committee Coordinator, listed on the city web-site.

Open to the public

Open to the public

Council and standing committee meetings are open to the public, unless an in-camera session is called.

You can also view meetings live on the city website

Sign up now to receive your City Council Update via e-mail, within days of every Council meeting. It’s simple to register for this free service, and just as easy to unregister if you so choose.

The City of Ottawa also has advisory committees, composed entirely of volunteers, who provide advice to City Council on specifically mandated areas of interest. These committees contribute to the development of policies, programs and initiatives that enhance Ottawa’s quality of life.

See the main administrative structure of the City

Planning for equitable and inclusive cities

Creating a City for All